After the two “short” stages on the previous days, we were facing a long stage with 24 km again with acceptable weather, although it was quite cold again. The walk started with ascending paved streets and gravel roads already in the beginning. We passed the half-way point, which says 63.5km. Thanks to our detours of the other stages, we already had over 90 🙂 After a turn in the forest, we saw a sheep herd with about 40 animals in front of us. Folling their instinct, they walked on in front of us and we were chasing them quite a bit, until one of them decided that enough was enough, and went into the forest. All of the others followed. Sheep, pah! After this awesome view and quite a descend, we found the second hut on our way at about twelve kilometers. We ate our sandwiches and some seconds after our arrival, two well-known friends came visiting: hail and the Holländer! Both were over after a few minutes.

We still put on our rain covers again and went on. After some downhill, the way continued uphill into the forest. There the weather turned against us again and a heavy rain and hail mix set in. We all walked on head down, but a bit tired. 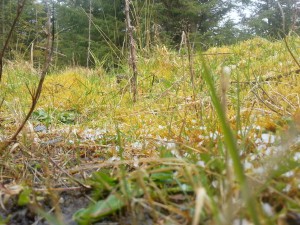 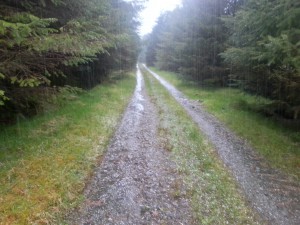 When the rain ended after an hour or so, all three of us were wasted and would rather have not walked more. But there was no alternative, was there?

According to the GPS, our destination was still 6 km away, which were really painful on the feet due to the paved roads and only bearable by another quick snack break. When we finally arrived at the Kyle Farmhouse B&B, Margaret welcomed us with Budweiser and scones, which we enjoyed in the sun.

For dinner, we had turkey, ham and salmon with vegetables and red wine. As none of us was up for party and the next pub was miles away, we went to bed before 8 pm and fell asleep while the sun was not even set yet.