The final day of the journey began with a massive cooked breakfast including eggs, black and white pudding, sausage, bacon and porridge and a semi-gray sky. Quickly, the sky lightened up and the sun was to stay with us for the remaining way. We walked over beautiful fields and could enjoy many beautiful views. 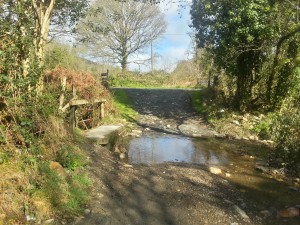 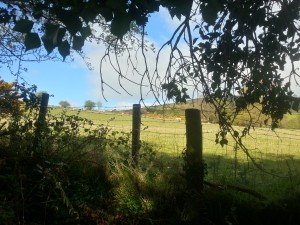 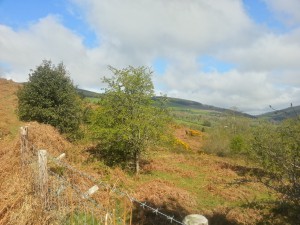 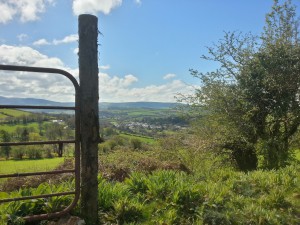 Somewhere at around half the way, we had a lunch break, eating sandwiches and chocolate. When we continued, we passed something one could call a junk yard, but to us it looked like the scenery for a strange movie. When we were at about four km from Shillelagh, we passed the Dying Cow Pub, where an old man told us that it’ll open in 20 minutes, so we continued the walk. A somehow shabby looking building was about the first we saw. It had restaurant & bar written on it.

A completely drunk lad stumbled out of one of the doors and tried to talk to us, which only worked partly. Motivated by his state, we entered the door he had come out of. Standing in an almost dark room, we saw another room behind the bar, to which we went next. As the audience of the The Snug was not the usual friendly kind, we had until then, we just had a pint and went on to check in at the Maritana B&B, which was by far the nicest and most modern we had on our way. After a shower and with the good feeling that we have finished the whole thing, Mrs. Berna O’Brien told us there was no other place than the restaurant next to the Snug for dinner.  We thus also came to enter the third door of the building and found an acceptable restaurant where we had pizza with chips, dry roast beef and overcooked pasta. After several more beers, we called it a day.

The hike was really a great experience for all of us, but left us with two riddles: first, how are you supposed to use these without either burning of freezing yourself?