Looking out of the window at seven am felt a bit unreal. Was this still the same Ireland that we were drowning in yesterday? The one point four kilometers that almost felt like a torture just the day before, were gone in a few minutes. The weather was nice with temperatures only little below ten degrees. Finally we were able to have a look at the beautiful landscape, with hills galore and a changing view after each step walked. 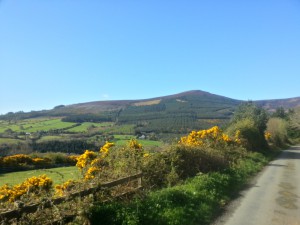 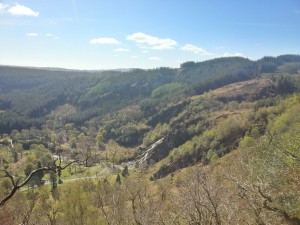 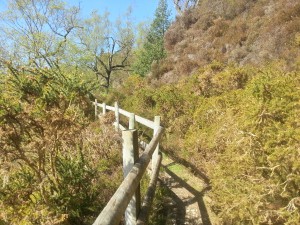 Each of the stone walls or hedges separating the fields was accompanied by shining yellow gorse bushes. This was finally the Ireland that we were hoping to find!

After walking along a river and seeing a waterfall for several hours, climbing several hundred meters, we reached the peak of the Djouce (725 m). It was time for the next Gipfelmoshen in freezing wind, but at least with clear sight. The gray stripe in the background actually is Muir Éireann! We had a nice lunch break below the peak eating the remaining baguette and some garlic potatoes and corn Mr. C had bought in Dublin. The onward journey brought us another peak, White Hill (630 m), which was happily taken for another round of Gipfelmoshen. However, nice the walk was, the final part was a stretch again, walking down to the valley on a paved road, which was pretty hard on knees and feet.

Deliverance finally came in form of the blonde angel Ashley (name according to pub bill), who served us cheese cake in glasses at the Coach House in Roundwood. After the refreshment, we felt strengthened enough for the final meters to the Riverbank B&B, where Josie McCabe offered us tea and a re-vitalising shower.

We found nice food and a cakey desert in the Byrne & Woods. During our meal, we heard that someone in the associated pub was playing violin and some sort of bag pipe. Made curious by this, we went over after dinner and found a group of a dozen people with instruments that were playing Irish folk music, to which we listened for some time. The following poster was hanging behind the bar: Apparently our angel was one with many skills. We were happy not to have met Kim, though. And I can tell you one thing: after walking for six hours straight, good food and some beers, one really does sleep well 😉